Some call it art. Others call it magic. Chef Robert calls it “exploring.” When it comes to the difference between a cook and a chef, it’s all about the combination of flavors. Flavor is Chef Robert Aranson’s core food philosophy. “I love to create my own dishes and surprise everyone at the end,” he said in an interview with Texoma Living. “Nothing is ever the same; it can only get better with tasting and perfecting.” 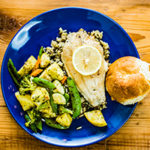 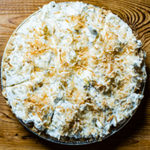 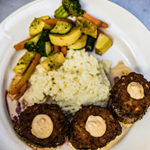 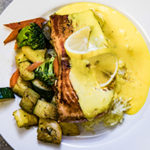 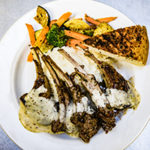 OVER 25 YEARS OF FLAVOR

Chef Robert Aranson’s love for cooking began in his father’s kitchen when he was just a kid. “My father loved to cook. I would sit in the kitchen for hours with him just waiting for him to ask me to help stir the next dish,” he told Texoma Living. At 12 years old, the real “work” began when he landed a job at Big Al’s Smokehouse in Dallas. His chosen career decided, Chef Robert went on to further learn about and train in the culinary arts at Dallas Community College and Johnson & Wales University. In addition to learning a variety of cooking techniques and fulfilling academic responsibilities, he also learned vital on-the-job training in how to run a restaurant from the ground up. At the Dallas Community College program, he even trained under a chef at the Dallas Market Center who was a part of the American Culinary Olympic Team.
Once Chef Robert completed his education and hands-on training, he became the saute chef for the City Cafe. From there, he went on to places like the Belo Mansion and the Dallas Convention Center. However, his culinary dreams didn’t really start to come true until 1995 - when he took over Kelly’s Restaurant in Kelly Square. Since then, Chef Robert has been a pillar of the Texoma culinary scene, from Kelly’s Restaurant, to his own gourmet carry-out business Culinary Creations, to Willowood Ranch, to his own Sage Cafe. Through it all, he has also built a reputation for providing high-quality catering services featuring amazing food to events of all kinds and sizes. His secret? He doesn’t sacrifice flavor for quantity, and he provides amazing customer service. “We’ll even take the trash out for you,” is one of his favorite ways to describe what he means by “full-service catering” to his clients. Are you ready to see what 25 years of experience catering flavorful food and providing exceptional service in the Texoma area can do for your event? Give us a call or send us an email. We would love to speak with you.

Looking for places to eat in Sherman, TX? Chef Robert’s Sage Cafe offers simple, yet delicious lunch and dinner in a relaxed, charming atmosphere. From the scratch-made food, to the modern, rustic ambience, to the friendly, exceptional service, we think you’ll find Sage Cafe is one of the best restaurants in Sherman, TX. Have an event? Ask about the options for a full-service, catered event at our place or yours.

Learn More About Our Cafe

Simple. Elevated. Beautiful. Delicious. These are the words that describe Chef Robert Aranson’s food and catering style. No matter what kind of event you are catering in Sherman TX, Denison TX, or the surrounding areas, Chef Robert and his team are ready, willing, and able to offer you and your guests tantalizing displays of delectable food with impeccable service.
Request a Quote